A discovery of exceptional Neolithic engravings in Buthiers, Seine-et-Marne, France 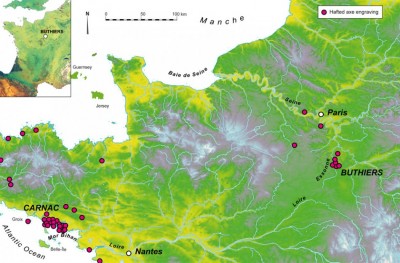 Figure 1. Distribution of hafted axe engravings from the fifth and fourth millennia BC in north-western France (after Cassen 2012).

A campaign to record engravings of Neolithic axes in the Massif de Fontainebleau, south of Paris, (Figure 1) in June 2013 led to the discovery of a large panel of engravings consisting of a hafted axe with a crook handle, an anthropomorph, and two motifs that we have provisionally interpreted as boats. The engravings, which one of us (SC) found during joint prospecting, are on a huge block of Stampian sandstone that broke off the table rock around a dry valley on the right bank of the Essonne. The large size of the frieze (4.5m long by 2.8m high), and the high quality and techniques of the imagery, which includes bas-relief and champlevé, make this composition a major element for understanding Neolithic iconography in France.

The hafted axe motif occurs between a natural projection on the left, whose ridge has been softened by percussion, and the anthropomorph on the right (Figure 2). The proximal end of the axe handle is still buried in the soil. On the basis of the size of a similar axe at Closeau in Nanteau-sur-Essonne (Bénard 2011), the handle probably extends for another 0.4m into the ground, and the original soil surface was probably at least that far again below the handle. 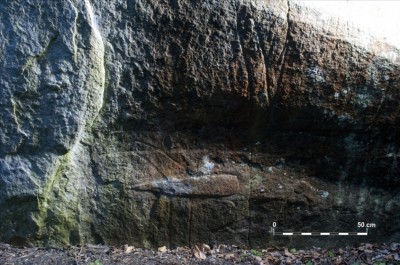 Figure 2. Photograph of the hafted Bégude-type axe. The handle is still partly buried in the soil.

The shape of the blade is so clear that it can be identified as a Bégude axe, which is the oldest form in the Western European typology table for polished axes made of Alpine rocks (Pétrequin et al. 2012). The representation of such a large version (0.61m) of an imported tool in such an unusual spatial and architectonic configuration makes us think that it can only be understood by integrating it into the study of socially valued axes from the Alps.

The central motif extends over three slopes of the rock face: the first, at the bottom, is sub-vertical for 0.7m and descends into the ground; the one above it is 0.5m high; and the top one, which continues until the summit, is slightly inclined towards the back, and consequently shows the most obvious signs of weathering (Figure 3). The state of preservation of the engravings logically follows this same gradient.

The anthropomorph’s waist occurs along a natural ridge parallel to the ground, making it difficult to differentiate the artificial line forming the waist from a fold in the rock. This deliberate use of a natural feature is not repeated in the upper composition, which includes a nose, eyes, a probable beard and 10 plume-like motifs which fan symmetrically upwards from the brows on either side of an axis through the centre of the figure. Observations of before-and-after relationships show that the engraving was basically created from top to bottom. 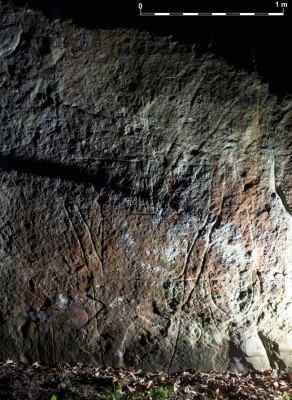 Figure 3. Photograph of the anthropomorph. Note the hafted axe on the left and U-shaped crescent on the right. 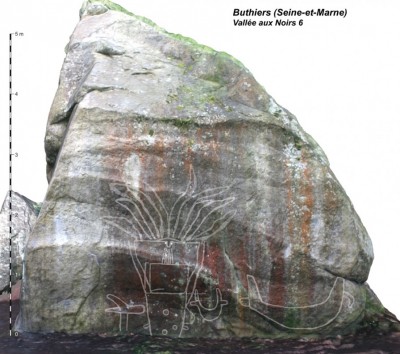 Figure 4. A frontal view of the rock with the engravings graphically outlined as they appear in a 3D textured model.

Obvious analogies between these ‘plumes’ and those of anthropomorphs on other vertical rocks (Le Closeau, Caldwell 2013) and stelae in the region (L’Ouche de Beauce in Maisse, Tarrête 2001; Rouville in Malesherbes, Devilliers 2005) suggest that they are linked. Although the anthropomorph’s face resembles those at Closeau, the ‘beard’ makes this figure unique. Furthermore, a quadrangular sign engraved on the chest is the oldest part of the motif. The lower part of the anthropomorph, which is still buried, was not reached during the initial survey (Figure 4).

The ‘Boat 1’ motif is formed by a continuous line that forms a deep crescent with a single symmetrical projection on each side. The ensemble, which partially follows natural folds in the rock, seems to have been tilted intentionally towards the anthropomorph, whose right side touches the motif’s left flank at two points and reflects its general curve. The sign is similar to known representations of symmetrical vessels with raised extremities.

The previous motif is accompanied by a larger, more asymmetrical crescent on the right: ‘Boat’ 2. Two signs have been added to its high ends: one at an angle to the left and another near the summit on the right, where it forms a beak-like hook. The ensemble is seated on a huge fold in the rock, which curves under the anthropomorph’s face and above the hafted axe like a wave (Figure 5). The guiding lines of the representation lead us provisionally to interpret the motif as a vessel whose angularity suggests that it was made of sewn planks and whose right-hand projection suggests a paddle.

Figure 5. Profile and frontal views of a 3D photogrammetric model of the rock with a graphic inscription of the signs upon the supporting rock face.

During 2014, investigation of the discovery will be developed in two ways. First, test pits will be dug in the sediment accumulated at the foot of the frieze to reveal the buried parts of the lines and to evaluate sedimentation. The possible preservation of stratigraphic units might provide us with elements for direct or indirect dating, notably by 14C and OSL. The second goal is to perform a more thorough photographic recording under turning light, following protocols perfected in Brittany, which will allow better surface and chronological analyses of each line, so that an error-free dynamic model can be created.

The discovery already raises several implications. First, it lends support to the possibility of recognising real objects like large Alpine axe blades in engravings (Cassen 2012). Such axes, which were often highly polished, have been found in both sacrificial and mortuary contexts (individual tombs under tumuli), but never in domestic ones. It is worth noting that the axe below the ‘plumed’ face 3.2km away at Closeau also has a Bégude blade while the closest engraving of a hafted axe, in the ‘Grotte de la Hache’, is a different, northern type (Altenstadt/Greenlaw). Both forms are also present elsewhere in the region (cf. JADE database), with the latter occurring in Pecq (Yvelines) and Lieusaint (Seine-et-Marne), while an imitation of a Bégude blade was found in a spacious and uncommon individual VSG/Cerny tomb in the same commune as the new stela, Buthiers (Samzun et al. 2012).

The clarity of the motifs also makes it possible to make good comparisons with those in the Armorican zone, which presents new possibilities for framing studies and interpretative debates. The ‘plumes’ are remarkably similar to the ‘spouts’ of the two most realistic sperm whales of the Carnac region (Kermaillard, Mané Lud). At the same time, the individual elements of the fan-shaped structures may be associated with similar designs on some phallic motifs in Brittany.

But beyond these polysemic arrangements, the set of structural correspondences between the zones suggests that they were strongly linked. These include the association of hafted axes with quadrangles and crescents on stelae in both regions, while the interpretation of crescents in Brittany as boats (Cassen 2007) seems to have been validated by the details of the Buthiers crescents. The idea that semiotic entities were shared to such a degree by various Neolithic societies during the fifth and fourth millennia BC, that an iconographic repertoire was faithfully repeated across a zone that now encompasses Burgundy and the upper Rhone, can now be reasonably supported by referring to the huge ‘natural stela’ in the Vallée aux Noirs.

This study was programmed in 2011 and carried out under the aegis of the Jade2 Project ‘Interprétations sociales des objets-signes en jades alpins dans l’Europe néolithique’ (ANR-12-BSH3-0005-01), managed by the MSHE Ledoux, Franche-Comté University, with the help of the University of Nantes, the École Nationale Supérieure d’Architecture de Nantes, D. Simonin (Nemours Museum), J. Tarrête and L. Valois (Gersar).